Congratulations to the Bay Oaks Boys for their summer accomplishments!!

Our 2000/01 Gold NPL Boys competed in the West Regionals National Cup in mid June. In their first game Saturday, they tied to 01/02 Boys Red 1-1. The next day they played the strong and later-to-be champions of the tournament TFA S.E. LA Barca. It was a tough 4-1 lost. On Monday, they bounced back and tied Real Sacramento Tarascos 01.

Our 2000/01 Boys team was a group of very talented players. They were ranked top 10 in the nation for the whole year. We wish them all good luck on their next journey.

Also Playing for their Colleges : 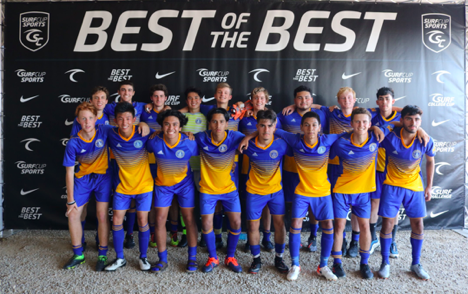 Our newly formed 2001/02 Gold NPL Boys competed in the highly prestige Surf Cup. Surf Cup is known to be one of the top tournaments in the nation. The 01/02 Boys started off their tournament with a win (1-0) against Blues FC 01/02 Navy on Sunday afternoon. The next morning, they played against LA Galaxy San Diego. The 01/02 boys were down 1-0, but soon after scored to tie the game. The game ended with a 1-1 draw. That afternoon, the 01/02 boys played their last game of the group stage against a strong Seattle United FC 01/02 team. This game would determine who would win the group and move on to the semi-finals of the tournament. Seattle took the lead with a goal in the 15th minute, but our EBU Bay Oaks boys responded quickly with a goal from a free kick. The game went back and forth with both teams creating opportunities, but it was an unlucky PK in the last 5 mins of the game that would take Seattle United into the next round. On Monday, the boys played a showcase game against RSF Soccer Attack 01 Academy. The 2001/02 Boys went down 2 goals early in the first half. In the second half, the boys picked up their game and scored a goal to bring the game 2-1. The boys kept pressing and created opportunity after opportunity, but could not put the ball in the net to tie the game. The 01/02 boys lost the game 2-1, but had a great showing throughout the tournament. 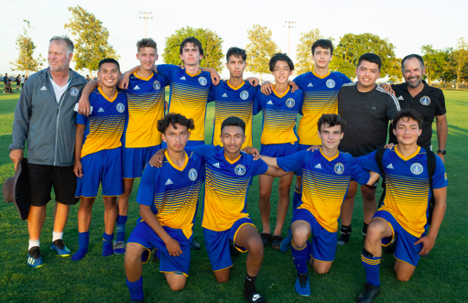 Our 2003 Gold NPL Boys competed in the Davis Legacy College Showcase in late July. On Saturday, the 2003 boys started off the tournament with a great win over a strong Union Sacramento FC 03, beating them 2-1. Later that day, they squared off against another strong opponent FC Sporting Premier 03. This game ended with a 1-1 draw. The next day they played against Cencal Cosmos 03 Boys Grey. This game was a must win in order to take their group and move on to the quarterfinals. The 2003 boys won the game 2-0 to top the group. Quarterfinals were scheduled to take place that Sunday evening. The 2003 boys were matched up against Turlock Academica Jrs 03 NPL. It was a hard fought game, but the 2003 boys lost 2-1 to the later-to-be champions of the tournament.